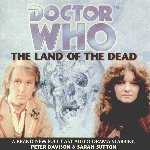 The TARDIS on Earth, 1964, in Alaska, only just avoiding a collision with a two-man aeroplane. Apparently following a scent the TARDIS lands in the same location, thirty years later.There they meet Englishman Brett, with his interior designer Monica, and the half-Inuit Tulung.

Something doesn't like this new intrusion; local spirits seem intent on erasing Brett's structure and its secrets. The Doctor may be able to halt the assault if he can find out what Brett is up to. Nyssa seems to be in tune with the spirits, although she doesn't entirely like what she sees..