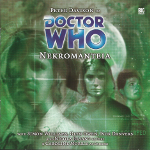 In the depths of space a little known district harbours a terrible secret. Long known as a place of death, it claims thousands more lives as a great corporate space-fleet goes to war. As the fleet screams out in fear and pain, an irresistible voice calls out to three travellers and a macabre mind sets a deadly trap.

The Doctor, Peri and Erimem face the terrors of Talderun and the wrath of a corporate empire as they struggle to understand the hideous secret of the domain of the dead, ­a district known in legend as Nekromanteia.